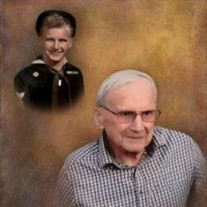 Raymond (Bud) Bowers, 91, of Camp Hill, passed away Tuesday Oct. 18, 2016, at home. Born December 15, 1924 in Heidlersburg, PA he was a son of the late George and Nellie (March) Bowers. Ray married the late Lourene (Tippett) Bowers and they had one son, Michael. A proud Navy veteran, he served in the Pacific theater in World War II on the LSM 305.  After the war he attended and graduated from Franklin Marshall College on the GI Bill.  After working in various enterprises, he began a long career working as an accountant and, later, as an assistant controller for the State of Pennsylvania in the general accounting office.  After retirement, he began a “second” career in a variety of activities from house painting to coin and sports memorabilia collection and sales.  He was very active for years in the Senior Olympics, earning many medals in various events well into his eighties.  For many years, he and his wife enjoyed winters on Anna Maria Island, FL.  Ray will be remembered for his quick and ready wit and love of competition.   Ray was preceded in death by his aforementioned first wife, the late Lourene (Tippett) Bowers, of Shiremanstown, who passed away October 20, 2005.  Additionally, by his ten brothers and sisters.  He is survived by his son, Michael, of Buffalo, New York, and eight grandchildren. Friends will be received from 11 am to 12 pm Saturday, Oct. 22, 2016, in the Musselman Funeral Home and Cremation Services, 324 Hummel Ave Lemoyne, PA. Services will be held at 12 PM at Musselman Funeral Home.  Afterwards, Ray’s family asks that all attend a repast to celebrate a wonderful man and a life well spent at Rock Bass Grill 461 S. Front Street Wormleysburg, PA 17043.  Musselman Funeral Home Is Honored To Serve The Bowers Family.

Raymond (Bud) Bowers, 91, of Camp Hill, passed away Tuesday Oct. 18, 2016, at home. Born December 15, 1924 in Heidlersburg, PA he was a son of the late George and Nellie (March) Bowers. Ray married the late Lourene (Tippett) Bowers and they... View Obituary & Service Information

The family of Raymond L. Bowers created this Life Tributes page to make it easy to share your memories.

Send flowers to the Bowers family.