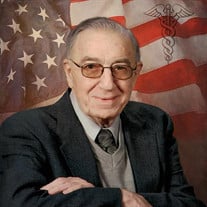 Raymond C. Grandon, MD passed away on December 9, 2018 at Pinnacle Health Harrisburg Hospital at the age of 99. He was surrounded by his loving family at the time. Dr. Grandon was born in Carlisle, PA on November 27, 1919 to the late Frank Grandon and Theresa Libonat. He grew up in Harrisburg and graduated from William Penn High School. He completed his undergraduate degree at Dickinson College then going on to Jefferson Medical College to get his MD in 1945. He did his internship at St. Luke’s Hospital in Bethlehem, PA, served as a Captain in the U.S. Army Medical Corps and completed his Residency in Internal Medicine at Harrisburg Hospital. Upon accepting a residency in internal medicine at Harrisburg Hospital in 1948, he discovered that the program was not accredited. His work to have that situation rectified made him deeply committed to medical education and continuing education, especially as it related to physicians returning to practice upon discharge from the armed services. When he joined organized medicine, Dr. Grandon became a member of the PMS Commission on Medical Education, which later became a part of the Council on Scientific Advancement. He was named council vice chairman in 1958 and two years later became chairman, a post he held for an unprecedented 11 years. At the same time, Dr. Grandon became involved in the work of the Dauphin County Medical Society. He has held every office in the county society, including secretary/treasurer for ten years and the presidency in 1971. He set up his private practice in internal medicine with a subspecialty of cardiology in Harrisburg in 1950 and practiced there until his retirement at the age of 96, in December of 2015. Later he became active in the Pennsylvania Society of Internal Medicine and served on many of its committees and held the offices of treasurer and secretary. In 1974 he began the first of two consecutive terms as president of the Pennsylvania Society of Internal Medicine, an unprecedented honor. For PSIM, his service has extended beyond the Commonwealth. He has held numerous committee posts for the American Society of Internal Medicine, including chairman of the Bylaws Committee since 1976. Dr. Grandon is known for his constant supply of ideas. Some of the “firsts” he was responsible for in the Harrisburg area include: In early 1950, he persuaded a local baker to make a salt-free bread for cardiac patients in central Pennsylvania – that product is now widely available; He was responsible for the idea, fund raising, and production of the first live TV heart operation in the nation (Presbyterian Hospital, Philadelphia to Harrisburg area on WTPA program); In 1970, he was one of the prime founders of the first successful cardiopulmonary rehabilitation center in the country, a concept which is now widespread; He was also in the forefront of the movement for pacemaker implantation, making Harrisburg the second place in the nation utilizing this therapy. Dr. Grandon was elected State Society Secretary in 1969 and was elected trustee from the fifth district in 1973, a post he held until 1980 when he was elected Vice President. He was also a delegate to the AMA and Vice Chairman of the Pennsylvania Delegation. Dr. Grandon held privileges at Harrisburg Hospital, at Holy Spirit Hospital, and at the Rehabilitation Hospital in Mechanicsburg, an institution he helped found and where he was medical director of the CPR center. He is also a clinical assistant professor of medicine, Milton S. Hershey Medical Center of the Pennsylvania State University. He was a life member of the American College of Physicians and past president at the Jefferson Medical College Alumni Association. For eight years, Dr. Grandon was a chairman of the American Medical Association’s (AMA) board of trustees ad hoc committee for medical legal problems, and he served as an AMA delegate for 24 years. He was president of the forum on Medical Affairs in 1991 and holds a life membership in the American College of Physicians. Dr. Grandon has received numerous awards, including the Pennsylvania’s Society of Internal Medicine’s Robert Pressman Distinguished Internist of Pennsylvania Away in 1997. The Rotary Foundation International named him a Paul Harris Fellow in appreciation of tangible and significant assistance given for the furtherance of better understanding and friendly relations between people of the world. Dr. Grandon served as Medical Director of the Villa Theresa Extended Care Facility in addition to his full-time practice in Harrisburg. Long active in voluntary medical and community organizations, Dr. Grandon was involved with medical issues at the state level. He was the first medical director of the Pennsylvania Health Department’s Counseling Center on Alcoholism and has been a member of various groups including the Governor’s Commission of Alcoholism, the State Board of Medical Education and Licensure, the Health Department’s Laboratory Advisory Committee and the Attorney General’s Advisory Committee on Drug and Alcohol Problems. At the national level, he has served as a committee member of the Federation of State Medical Licensing Boards and as a delegate and trustee of the American Society of Internal Medicine. Ray is survived by his loving wife, Doris, of 73 years, his son, Raymond Jr and his wife, Nancy, of Lemoyne, his daughter Suzanne and her husband, Jim of Scottsdale, AZ, his son, David of New Cumberland, Grandson Matthew Grandon, of Cambridge, MA., and many Nieces and Nephews. A visitation for family and friends will be held on Friday, December 14, 2018 from 7 to 9 P.M. at the Musselman Funeral Home. Mass of Christian burial will be celebrated at St. Theresa’s Roman Catholic Church New Cumberland on Saturday, December 15, 2018 at 11:00 A.M. Burial will be private at Holy Cross Cemetery Harrisburg. In lieu of flowers, contributions in his Memory and honor can be made to The American Heart Association, 4250 Crums Mill Road Suite 100 Harrisburg PA. 17112 The Musselman Funeral Home and Cremation Services Is Honored To Serve The Grandon Family. 324 Hummel Avenue Lemoyne, PA. 17043. www.musselmanfuneral.com

Raymond C. Grandon, MD passed away on December 9, 2018 at Pinnacle Health Harrisburg Hospital at the age of 99. He was surrounded by his loving family at the time. Dr. Grandon was born in Carlisle, PA on November 27, 1919 to the late Frank... View Obituary & Service Information

The family of Raymond C. Grandon MD created this Life Tributes page to make it easy to share your memories.

Send flowers to the Grandon family.