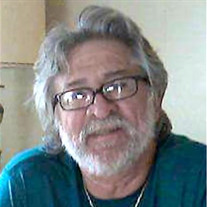 Richard Wayne Mitchell (Ric), 60, departed this life January 13, 2018 in his home in Camp Hill, PA. He was born March 4, 1957 in Harrisburg Hospital, to Daniel Myers and Saundra Mitchell, of Harrisburg, Ric is survived by his mother, Saundra Mitchell of Lemoyne; three brothers, Vince and wife Doris Mitchell of Mechanicsburg, George Mitchell of Enola, US Army (retired) Scott and Cristi Mitchell of Missouri; six sisters, Louann and husband Rodney Reese of Lemoyne, Darleen and husband Curt Afdel of Camp Hill, Kelly Mitchell of Lemoyne, Sheri Myers of Lemoyne, Angie Jakubowski of Schuylkill County, Ruby Mcpherson of Wormleysburg. Ric was a disabled Vietnam Era Veteran. He was employeed for Western Express Trucking as a long distance operator. Ric was a lover of music and played the guitar. He also loved softball and was a extraordinary swimmer who loved the ocean. After high school at Cedar Cliff, Ric enlisted in the Navy. As an Airman, he served four years on the prototype nuclear powered aircraft carrier USS Nimitz CVN-68. Rick was a member of the Nimitz Nucleus crew, Pre-Commissioning crew, Commissioning crew, and a "Plankowner" who was actively involved in the Navy's acceptance from the ship builder after successful sea trial tests. On behalf of the 6000 + Sailors, Marines and Friends who proudly served with Rick during his four years onboard the the USS Nimitz, we honor his military service to our country. "Now hear this, Now hear this, Airman Richard Wayne Mitchell "Plankowner" departing". Services will be private and at the convenience of the family. The Musselman Funeral Home is honored to serve the Mitchell family.

Richard Wayne Mitchell (Ric), 60, departed this life January 13, 2018 in his home in Camp Hill, PA. He was born March 4, 1957 in Harrisburg Hospital, to Daniel Myers and Saundra Mitchell, of Harrisburg, Ric is survived by his mother, Saundra... View Obituary & Service Information

The family of Richard Wayne Mitchell created this Life Tributes page to make it easy to share your memories.

Send flowers to the Mitchell family.