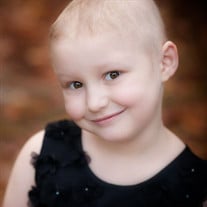 Rileigh Kaye Sunday, age 9 of Sanford, NC, ended her struggle with cancer on September 15, 2017, in the peace of her mother’s loving arms. Rileigh fought fearlessly against Leukemia for over four years. Her family deeply mourns the loss of Rileigh, but her life was just as beautiful as it was tragic. Rileigh was born on August 16, 2008 at Fort Bragg, NC, the first child of two extremely proud and happy parents, Elizabeth and Todd Sunday. Rileigh’s birth seemed a long time coming due in part to the needs of her father’s military service. From the very beginning, she never left her mother’s side, and together they had many adventures while her father served abroad. From the moment she could walk, Rileigh rambunctiously explored everything within reach as though she could never get enough out of life’s experiences. Her parents often compared Rileigh to Rapunzel from Disney’s “Tangled” because every day was the “best day ever!” She was her mother’s helper, always ready to lend a hand whenever needed. Rileigh loved the beach and longed to learn to swim one day. Exceptionally clever, Rileigh enjoyed schooling adults in games of all kinds, from cards and board games to the computer. Together with her father, she created beautiful, elaborate worlds on Minecraft. Her favorite game to play with family was Uno. Rileigh always held her wild cards until the end and won more than her fair share of hands. She was an attentive student, a creative artist, a curious scientist, and a loyal friend. Rileigh attended school at Highland Elementary School in Sanford, NC and when inpatient for treatment, continued to learn from teachers and the Wonder Connection program at UNC Children’s Hospital. In addition to being an avid reader, she was recognized for citizenship by demonstrating model classroom behavior. Rileigh loved learning about animals and conducting science experiments involving slime, rockets, and volcanos. With the kindest of souls, Rileigh loved animals, especially pandas and her golden retriever, Dexter. Rileigh possessed a natural wit and made surprisingly profound observations that always kept her friends and family laughing. Her humor was without effort, and she often did not understand just how funny and sweet she was. Rileigh was at times both shy and courageous, awkward and endearing. She made fast friends with those fortunate enough to meet her. When her illness kept her from attending school in person and being around children her own age, she eagerly made friends through the Girl Scouts of America, and the once, weekly meetings meant so much to her. Never selfish, she loved her family most of all. From the moment of his birth, Rileigh doted upon her little brother, Xander. She was his playmate and protector, which earned her the nickname “Mama Rileigh”. Together, the pair would laugh at the silliest jokes and have nightly dance parties to the sounds of Katy Perry, Lady Gaga, and Taylor Swift. Rileigh would often sing along to music on the radio, purposefully swapping appropriate words of her own that sounded like or rhymed with inappropriate lyrics. Above all, her family was the most important thing to her, and Rileigh valued bedtime stories and snuggling on the couch more than anything. The greatest big sister in the world, Rileigh is survived by her brother, Xander; her parents, Elizabeth and Todd Sunday; maternal grandfather, Paul Eggie; and fraternal grandparents, Stephen and Linda Sunday. Rileigh was preceded in death by her grandmother, Barbara Eggie. A viewing will be held Thursday, September 21, from 5-7 p.m. at Mussleman Funeral Home, 324 Hummel Avenue, Lemoyne, PA. A second viewing will be held Friday, September 22, from 10-11 a.m. followed by mass at 11:00, both at Good Shepard Catholic Church, 3435 Trindle Road, Camp Hill, PA 17011. The family will hold a celebration of life ceremony at a later point in North Carolina for those friends unable to travel to PA for the funeral. In lieu of flowers, please consider donating to CureSearch for Children’s Cancer (curesearch.org) or joining the National Marrow Donor Program (bethematch.org) in honor of Rileigh. Musselman Funeral Home Is Honored To Serve The Sunday Family.

Rileigh Kaye Sunday, age 9 of Sanford, NC, ended her struggle with cancer on September 15, 2017, in the peace of her mother&#8217;s loving arms. Rileigh fought fearlessly against Leukemia for over four years. Her family deeply mourns the loss... View Obituary & Service Information

The family of Rileigh Kaye Sunday created this Life Tributes page to make it easy to share your memories.

Send flowers to the Sunday family.