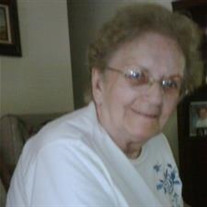 Rita A. Davis of Camp Hill, PA, passed away peacefully in her sleep at Golden Living Rehabilitation Center on May 10, 2015, of a heart ailment. She was 91. Rita was one of the “greatest generation.” She was the third child born to Isidore and Anna Rudzki and grew up in the Polish Hill neighborhood of Pittsburgh. She lost her father at age nine and her brother died shortly after returning home from WWII. She graduated from Pittsburgh’s Schenley High School in 1943 and went to work in a factory supporting the war effort. Around that time she met Robert L. Davis, and they started a lifelong love that lasted 60 years, until his death in 2005. Rita and Bob raised their family in the South Hills neighborhoods of Pittsburgh, though Rita never forgot her ties to the Immaculate Heart Parish on Brereton Avenue. In the early 1970’s Rita went to work at Kaufmann’s Department Store in Mt. Lebanon, and retired in 1990. Rita and Bob later moved to Camp Hill to be closer to their children and grandchildren, where Rita found the best neighbors and friends, including the Red Hats, and a wonderful parish home in the Church of the Good Shepherd. She was truly happy in her golden years. She is survived by son Richard and his wife Cynthia Davis of York; daughter Janet McNally and her husband Joseph McNally of Camp Hill; four grandchildren: Richard Davis of Dayton, OH; Jennifer Ogden of Coto de Caza, CA, Jeanne McNally of San Diego, CA, and J. Claire McNally of Blacksburg, VA; and five great-grandchildren: Zachary Davis, Maria Davis, Joseph Davis, Kara Ogden, and Brooke Ogden. We also remember little Maggie the Yorkshire Terrier, Mom’s constant and beloved canine companion, who has now found a second lucky home with neighbors. Rita’s family will receive guests at the Church of the Good Shepherd in Camp Hill on Wednesday, May 13th starting at 1:00 PM. Mass of Christian Burial will follow at 2:00 PM, with Fr. Paul C. Helwig, Celebrant. Interment will be held at Gate of Heaven cemetery in Mechanicsburg, following Mass. In lieu of flowers, Rita’s family asks that you remember her with a memorial contribution to Shalom House, 9 S. 15th Street, Harrisburg, PA 17105. Musselman Funeral Home Is Honored To Serve The Davis Family.

Rita A. Davis of Camp Hill, PA, passed away peacefully in her sleep at Golden Living Rehabilitation Center on May 10, 2015, of a heart ailment. She was 91. Rita was one of the &#8220;greatest generation.&#8221; She was the third child born... View Obituary & Service Information

The family of Rita A. Davis created this Life Tributes page to make it easy to share your memories.

Rita A. Davis of Camp Hill, PA, passed away peacefully in her...