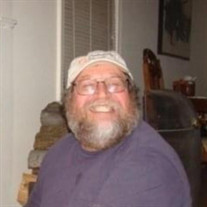 Robert G. “Bob A.” Augustin, 72, of Camp Hill, Pennsylvania, rode off into the sunset on Sunday, May 10, 2020, after a weekend of visitors and reminiscing. He was born July 27, 1947, in York County, and was adopted by Sylvester and Lois Jones Augustine and then again by Sylvester and Dorothy Augustine. No one knows for sure why the “e” in Bob’s last name skipped a generation. Bob attended Cedar Cliff High School before becoming a master electrician and general contractor. His knowledge of residential construction knew no bounds and he was often called upon to confer his wisdom and insults upon others in the trade. Known for his suspenders and beard, Bob was a lovable curmudgeon and teller of tall tales. He enjoyed motorcycles, taking long lunch breaks, and collecting broken things he swore he would fix and reuse (Spoiler Alert: They’re all still broken). He was preceded in death by a complex combination of adoptive and almost-adoptive parents, his brother, Edward, and his son, Robert. Bob is survived by his stepson Doug, daughter Lori Ann, two grandchildren, two patient ex- wives, an unruly mob of friends and neighbors, and the entire waitstaff at Nick’s 114 Café. He is also survived by Rocky the cat and Big Bertha the obese goldfish. Bob’s friends and family would like to thank the Compassus hospice care team, Mary Lynn, and Margie for the care they provided in his final days. A wake will most likely be held sometime after this whole pandemic thing. In the meantime, Bob will be laid to rest in Rolling Green Cemetery.

The family of Robert G. Augustin created this Life Tributes page to make it easy to share your memories.

Send flowers to the Augustin family.