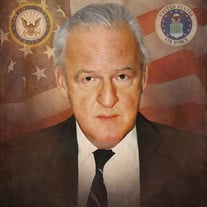 Robert L. Kelly (Bob), 85, of New Cumberland, died peacefully at home on Tuesday, April 7, 2020. Bob was born in Pittsfield, MA, on September 5, 1934, the son of the late John and Irene Kelly (Lassor). After serving in the U.S. Navy during the Korean War, Bob enlisted in the U.S. Air Force, a career that took him to many places, including Spain, Germany and Alaska. He was a Master Instructor for weather officer training at Chanute AFB in Rantoul, IL. Both before and after retiring from the military in 1973, Bob worked as a realtor. He later joined PennDOT, where he wrote and produced safety training programs and videos for highway workers and commercial drivers. He also earned an associate degree in business from Harrisburg Area Community College. Bob enjoyed watching major league baseball and was a longtime Boston Red Sox fan. He was also an avid reader of books about U.S. history, and his favorite film was “Gone with the Wind.” Bob was a member of VFW Post 7415 in New Cumberland. Anyone who knew Bob will remember him well for his quick and dry wit, and his ample supply of strong opinions. Bob is survived by his wife of more than 50 years, Barbara A. Kelly (Lackovic); his daughter, Jane Irene Kelly, and son-in-law, Andrew N. J. Neilly, of Wormleysburg, PA; his step-grandchildren, Cella M. Neilly, of Berkeley, CA, and Callum S. Neilly, of Glasgow, Scotland; and his sons, John E. Kelly of Portland, OR, and James E. Kelly of Philadelphia, PA. Private interment will be held at Indiantown Gap National Cemetery. The family extends their thanks to the professionals at DaVita West Shore Dialysis and Heartland Hospice for all the care and attention they gave to Bob. The Musselman Funeral Home Is Honored To Serve The Kelly Family. 324 Hummel Ave. Lemoyne, PA. 17043.

Robert L. Kelly (Bob), 85, of New Cumberland, died peacefully at home on Tuesday, April 7, 2020. Bob was born in Pittsfield, MA, on September 5, 1934, the son of the late John and Irene Kelly (Lassor). After serving in the U.S. Navy during the... View Obituary & Service Information

The family of Robert L. Kelly created this Life Tributes page to make it easy to share your memories.

Send flowers to the Kelly family.