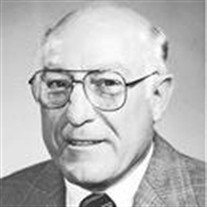 Robert E. Kessler, 92, of Bethany Village, Mechanicsburg, passed away peacefully on August 18, 2018, surrounded by his loving family. Bob was born on July 17, 1926 in Lebanon, PA, the seventh of eight children of the late George A. and Emma E. (Folk) Kessler. He was also preceded in death by brothers John, George, Frederick, and by sisters Helen, Emma, Dorothy, and Alverna. Upon graduation from Lemoyne High School, Class of 1944, Bob attended Gettysburg College. After a brief stint in the U.S Navy, he and his long-time sweetheart, Gerry Lonkart, were married in 1946. In 1950, they set up their permanent residence in New Cumberland, where they raised four children. After Bob's retirement, he and Gerry travelled to several continents and spent their winter months in Green Valley, Arizona, where they developed strong friendships with other snowbirds. As an active member of Grace United Methodist Church in Lemoyne, Bob served his church in various capacities. Bob and Gerry were also members of the Green Valley United Methodist Church. Bob worked hard and played hard. At Lemoyne High School, he quarterbacked the football team and also participated competitively in baseball and basketball. He was an avid bowler and was on national teams of the American Bowling Congress. Physical fitness was important to him, and Bob worked out regularly with his many friends at the Harrisburg YMCA. His other sports passions included tennis and golf at West Shore Country Club, as well as ping-pong and paddle ball. Bob thoroughly enjoyed big band music and had extensive record and tape collections. Bob's strong leadership qualities and organizational skills earned him positions with several business and community groups. After spending many years working in the family meat processing business, in 1967 he became President of Kessler's, Inc. Bob served as President of the following: West Shore YMCA, Harrisburg Area YMCA, Harrisburg Area Industrial Management Club, United Methodist Homes for Aging, Pennsylvania Meat Packers Association, Eastern Meat Packers Association, and West Shore Lions Club. He was Chairman of the Board of Directors of the former Harris Savings Bank, and served on the Boards of Directors of: Capital Blue Cross; National Independent Meat Packers Association; American Meat Institute; Harrisburg and West Shore Chambers of Commerce; and, the Cumberland County National Bank Advisory Board. Bob was a longtime member of various Masonic bodies. Being a man of strong conviction, he demonstrated his love for his wife, children, grandchildren, and great-grandchildren. In addition to his passion for family and his church, Bob was an avid fan of Penn State's football team – he and Gerry enjoyed many memorable tailgating trips, both to Happy Valley and away games. Bob and Gerry were great hosts and always included Nittany Lion Franks on their menus. In addition to Gerry, Bob's wife of 72 years, he is survived by daughters Barbara Wesby (Roger), Connie Kimmel (Paul), and Judy Killian (Doug), son Bob Kessler, Jr. (Cynthia Young Kessler), grandchildren Carla, Tracy, Jennifer, Andy, Olivia, Gabriel, and Emma, seven great-grandchildren, and numerous nephews and nieces. Extended "family" includes the many foreign exchange students from around the globe who were hosted by Bob and Gerry. The family would like to give special thanks to Bob's dedicated caregivers, to Kindred Hospice, and to the staff of the skilled nursing unit at Bethany Village. Visitation will be held at Musselman Funeral Home, 324 Hummel Avenue in Lemoyne from 5 p.m. to 7 p.m. on Friday, August 31, 2018. Bob's memorial service will take place at 11:00 a.m. on Saturday, September 1 at Grace United Methodist Church, 313 Herman Avenue in Lemoyne, with visitation at 10:00 a.m. Burial is private. In lieu of flowers, memorial contributions may be sent to Grace United Methodist Church, 313 Herman Avenue, Lemoyne, PA 17043, or to the Harrisburg Area YMCA, 805 North Front Street, Harrisburg, PA 17102. Musselman Funeral Home Is Honored To Serve The Kessler Family. www.musselmanfuneral.com

Robert E. Kessler, 92, of Bethany Village, Mechanicsburg, passed away peacefully on August 18, 2018, surrounded by his loving family. Bob was born on July 17, 1926 in Lebanon, PA, the seventh of eight children of the late George A. and Emma... View Obituary & Service Information

The family of Robert E. Kessler created this Life Tributes page to make it easy to share your memories.

Send flowers to the Kessler family.