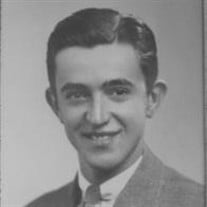 Robert “Pete”K. Miller, Sr., 92, formerly of Lemoyne, died on Tuesday, December 6, 2016, at the Church of God Home, Carlisle. Born on September 1, 1924, in New Cumberland, he was the son of the late Homer W. and Elizabeth A. (Smaling) Miller. Robert was a 1943 graduate of the New Cumberland High School, where he lettered in basketball, baseball and softball and played the drums in the high school band. He was a member of the Boy Scouts of America, achieving the rank of First Class. Robert served in the United States Navy from 1943 to 1946, and attained the rating of Radioman Second Class. He was stationed for two years on Adak Island in the Aleutians. Robert attended and graduated from Shippensburg State Teachers College following his military service in World War II. He began his teaching career in 1950 and taught business in Lemoyne High School, New Cumberland High School and Cedar Cliff High School. He was also the varsity basketball coach at both New Cumberland and Cedar Cliff High Schools, where he also taught night school and summer school. He was an active member of Trinity United Methodist Church, New Cumberland, his entire life. He was a founding member of the Young Men’s Christian Bible Class and was a faithful church usher for many years. He served as a member of the Staff-Parish Relations Committee. Robert also played the drums in the New Cumberland Town Band for many years, played on the New Cumberland town softball team, was a founding member of the New Cumberland VFW, as well as founding member and long-time participant in the New Cumberland Horseshoe Club. He and his wife, the former Nancy E. Trayer, were married for 69 years. She died on September 7, 2016 at the Church of God Home in Carlisle. Robert is survived by sons Rodney K. and his wife Elizabeth, of Hampden Township, and Randal K. and his wife, Laurie, of Ardmore, Pennsylvania, grandchildren Allison of Hampden Township, Jonathan of Ardmore, and Emory of Raleigh, North Carolina, and great grandchildren Cecelia and Emory Michael of Raleigh. He is also survived by one brother, Donald Miller, of New Cumberland. In addition to his wife, he was preceded in death by a son, Robert Jr., daughter-in-law, Mary Susan, and brothers, Homer Jr. and Gerald, and a sister, Marian. A viewing will be held at the Musselman Funeral Home, Hummel Avenue, Lemoyne, from 6:00 PM until 8:00 PM on Monday, December 12, 2016. There will also be a viewing from 9:30 AM until 10:30 AM on Tuesday, December 13, 2016, at the Trinity United Methodist Church, 410 Bridge Street, New Cumberland. The funeral service will follow at 10:30 AM at the church. Following interment at the Mt. Olivet Cemetery, New Cumberland, there will be a luncheon served at Trinity Church. Memorial contributions may be made to the Trinity United Methodist Church, New Cumberland, or to the Church of God Home, Carlisle. Musselman Funeral Home Is Honored To Serve The Miller Family.

The family of Robert K. "Pete" Miller Sr. created this Life Tributes page to make it easy to share your memories.