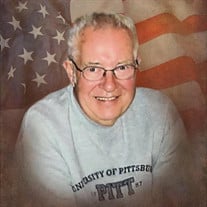 Robert F. Stokes, 92, of Mechanicsburg passed away Wednesday, September 23, 2020 at his home. He was an avid fan of Pitt Panther football, the Pittsburgh Steelers, and the Philadelphia Flyers. NASCAR was also a favorite weekly pastime of his. He loved to be outdoors, which included riding his motorcycles over 200,000 miles until he reached the age of 82. He also loved Country and Bluegrass music, traveling to see his favorite band, Iron Ridge, quite often. Bob was born in Harrisburg, and graduated from William Penn High School. He graduated from the University of Pittsburgh with a degree in Civil Engineering. Later he served as an engineer in the military during the Korean War. Although he never became an engineer in practice, he took over the responsibility of running the family business with his brother, Ed. They successfully managed Stokes MJillwork Inc. until 2001, when the decision was made to close the business. In addition to his parents, he was preceded in death by his wife of 63 years, Marjorie C. Stokes. He is survived by one son, Stanley and wife Valerie, one daughter, Susan and husband, David, granddaughters, Audrey and husband Afif, Emily, and Jennifer, along with a great-grandson, Adam. His family meant everthing to him and was a priority throughout his life. Due to current health restrictions, memorial services will be private with interment at Rolling Green Cemetery. In lieu of flowers memorial contributions may be made to the Helen O. Krause Animal Foundation, 813 S. Baltimore Street, Dillsburg, PA 17019. The Musselman Funeral Home is Honored to Serve The Stokes Family. 324 Hummel Avenue, Lemoyne, PA 17043.

Robert F. Stokes, 92, of Mechanicsburg passed away Wednesday, September 23, 2020 at his home. He was an avid fan of Pitt Panther football, the Pittsburgh Steelers, and the Philadelphia Flyers. NASCAR was also a favorite weekly pastime of his.... View Obituary & Service Information

The family of Robert F. Stokes created this Life Tributes page to make it easy to share your memories.

Send flowers to the Stokes family.