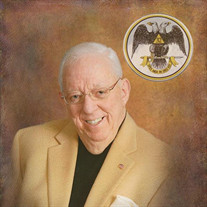 Robert Edward Telford, June 20, 1936 – December 30, 2021, passed peacefully surrounded by his family. Bob was born in Scranton PA on June 20th and was a graduate from West Shore High school class of 1955. Over the years, he held many jobs from representing Wrigley Chewing Gum to working for the Commonwealth of PA on the Senate side from which he retired. He was a Mason for over 60 years, belonging to the Eureka-West Shore Lodge as well as, a member of the Harrisburg Consistory, S.P.R.S. 32nd Degree. Bob was a member of the Trinity Lutheran Church, Camp Hill. He always would tell you his proudest accomplishments were his three daughters, four grandchildren and two great grandchildren. He was preceded in death by his parents, Marjorie and Gilbert Telford as well as a grandson, David Reed. He leaves behind his wife of 59 years, Susanne, as well as his daughters, Amy Reed (William) of New Bloomfield, Michele Addams (David) of Camp Hill and BethAnn Telford (Robert Latin) of Fairfax, VA. His grandchildren Nicole Klein (Todd) of Philadelphia, Robert Reed (Jenna) of Lancaster, Abigail Addams of New York City, Katherine Addams of Camp Hill and his great granddaughters, Elise and Blaire Klein of Philadelphia. He is also survived by his brother, Gilbert Telford of Center Lovell, Maine and his sister, Marilyn Schnaars (Richard) of Newark, Delaware. Funeral services will be held on Wednesday, January 5, 2022 at 12:00 PM. at Trinity Lutheran Church of Camp Hill, A viewing will be held at church from 11:00 AM until time of Service. Burial will be at Rolling Green Cemetery, Camp Hill. In lieu of flowers, the family requests memorial contributions are made to Masonic Village at Elizabethtown for the Masonic Village Hospice Elizabethtown in Bob’s name. (Mailed to Masonic Villages, Office of Gift Planning, One Masonic Drive, Elizabethtown, PA 17022. Musselman Funeral Home and Cremation Services is honored to serve the Telford family. 324 Hummel Avenue Lemoyne PA. 17043. MUSSELMAN

Robert Edward Telford, June 20, 1936 &#8211; December 30, 2021, passed peacefully surrounded by his family. Bob was born in Scranton PA on June 20th and was a graduate from West Shore High school class of 1955. Over the years, he held many jobs... View Obituary & Service Information

The family of Robert E. Telford created this Life Tributes page to make it easy to share your memories.

Send flowers to the Telford family.