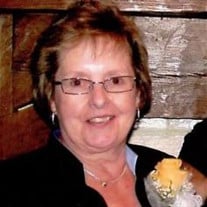 Roberta “Bobbi” Brandt Yerger, 74, passed away on May 26th at Arden Courts, Harrisburg, PA surrounded by her loving family. Bobbi was born to John and Roberta (Wagner) Brandt of Steelton, PA on March 12, 1942. Bobbi is survived by her husband Barry Yerger of Harrisburg, and they would have celebrated their 48th wedding anniversary this coming June 15th, daughter; Kristi Smith (Larry), Palmyra, PA, son; Brian Yerger, Morrisville, NC, step daughters; Cheryl Horne, (John), Tallahasse, FL and Deborah Pate, (Ken), Lynchburg, VA, aunt; Phyllis Shafer (Jack), Williamsport, PA, and uncle; William Wagner, (Betty), Harrisburg, PA. Roberta also has two grandsons, three step-grandsons, and three step-granddaughters. She has four step-great granddaughters and two step-great grandsons. Bobbi was preceded in death by her brother, John Brandt, and step daughter, Denise Swartz. She was a member of Centenary United Methodist Church in Steelton and worked at both AMP, Inc. and the Chambers Hill School. Besides spending time with Brenden and Colin, her grandsons, she also enjoyed gardening, cooking and playing with her dog, Kylie. Roberta was a very kind person, always looking to help someone else. She was honest, loyal and considerate and will be greatly missed by all that knew her. The family would like to extend its utmost gratitude to the staff at Arden Courts for the wonderful care given to Roberta during her stay there. Thank you also to the personnel at Celtic Hospice for their caring assistance. We would like to thank Susan Severino of Severino Health Advisors for guiding the family through this very difficult journey. A viewing will be held at 10:00 AM on Thursday, June 2, 2016, at Musselman Funeral Home in Lemoyne. Roger Smith, Chaplain of Celtic Hospice will be officiating the services at 11:00 AM.  Interment will immediately follow at Paxtang Cemetery, 401 Kelso St. Harrisburg, PA 17111. In lieu of flowers, memorial contributions may be made to the Dementia Society of America, P.O. Box 600, Doylestown, PA 18901. Musselman Funeral Home Is Honored To Serve The Yerger Family.

Roberta &#8220;Bobbi&#8221; Brandt Yerger, 74, passed away on May 26th at Arden Courts, Harrisburg, PA surrounded by her loving family. Bobbi was born to John and Roberta (Wagner) Brandt of Steelton, PA on March 12, 1942. Bobbi is survived... View Obituary & Service Information

The family of Roberta Brandt Yerger created this Life Tributes page to make it easy to share your memories.

Send flowers to the Yerger family.