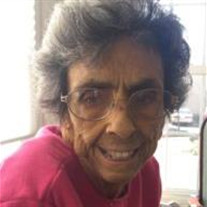 Romaine V. Neidigh, of Mechanicsburg, passed into our Lord’s Hands on Friday, March 24, 2017. A daughter of the late John and Lucia Villani, Romaine was born in Lemoyne, PA on June 1, 1923, and lived in Wormleysburg, PA for 75 years. She then lived in Mechanicsburg for 18 years. In addition to her parents, she was preceded in death by her husband, George L. Neidigh, a brother; Italino Villani and her beloved companion; Harry Keefauver, who was wonderful to her during their life together. She is survived by a niece, Jennine Villani Rhome of Marysville, special friends, Jay and Vivian Wamsley, Dot and Bill, Tim Haines and family, and Mark Nelson and family, as well as many other nieces, nephews and special friends. Her employment began at Davenports’ Restaurant. During World War II, she was employed at Middletown Pennsylvania’s Air Force Base, where she then began her 22 years of employment at the Lemoyne Dress Factory, and retired with 17 years from the Commonwealth of PA/Department of DGS. She was a member of Our Lady of Lourdes Church in Enola. During her entire life, she loved to cook, garden, square/round dance, play cards, horse ride, travel and spend time with family and friends. A visitation will be held at 10:00 AM on Monday, April 3, 2017 at Our Lady of Lourdes, Enola. A funeral mass will begin at 11:00 AM. Burial will be private. The family wishes to thank Grane Hospice Care and Home Instead Care for all the loving care and support you gave to Romaine. Musselman Funeral Home Is Honored To Serve The Neidigh Family.

Romaine V. Neidigh, of Mechanicsburg, passed into our Lord&#8217;s Hands on Friday, March 24, 2017. A daughter of the late John and Lucia Villani, Romaine was born in Lemoyne, PA on June 1, 1923, and lived in Wormleysburg, PA for 75 years. She... View Obituary & Service Information

The family of Romaine V. Neidigh created this Life Tributes page to make it easy to share your memories.

Romaine V. Neidigh, of Mechanicsburg, passed into our Lord’s...

Send flowers to the Neidigh family.