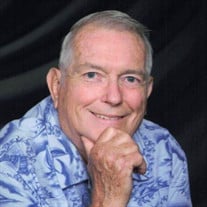 Stanley Harry Colestock Jr., of New Cumberland, lost his courageous battle, to overcome the effects of several chronic illnesses, on June 8, 2022, while a resident of Carolyn’s House on Linglestown Road. Stan was born on September 22, 1942, in Harrisburg, Pa. to Stanley Harry and Lynette Green Colestock. He was pre-deceased by both parents, his son David Michael Colestock and brother George R. Colestock. He leaves to mourn his loss, his wife of 59 years, Peggie Rogers Colestock, his son Daniel M. Colestock and wife Deborah Lopson Colestock as well as his beloved grand-dog Nellie. Stan was a graduate of Susquehanna Township High School, attended Shippensburg College and Thompson Institute. He enjoyed a thirty-two-year career at the former Naval Supply Depot Mechanicsburg, retiring in 1995. In his spare time, Stan learned to do many home repairs, although this was by no means his hobby. He would rather have been fishing, boating, gardening, playing poker or pinochle, watching TV, dancing, and traveling. Stan & Peggie went on numerous cruises, traveled to Canada, and visited all but one of the 50 United States. Stan is a member of Christ Presbyterian Church Camp Hill where he previously served as an Elder and a Deacon. He wishes to be interred in the Church’s Memorial Garden. A celebration of his life will be held at a later, hopefully post-pandemic date. His memberships included The Susquehanna Township Alumni Association, The White Rose Polka Dancers Association, Saint Theresa’s Little Flower Club and Sons of The American Legion. In lieu of flowers, interested parties are encouraged to make donations to Downtown Daily Bread at 310 N. 3rd St. Harrisburg, pa 17101. Stan enjoyed volunteering there for many years.

Stanley Harry Colestock Jr., of New Cumberland, lost his courageous battle, to overcome the effects of several chronic illnesses, on June 8, 2022, while a resident of Carolyn&#8217;s House on Linglestown Road. Stan was born on September 22,... View Obituary & Service Information

The family of Stanley H. Colestock Jr. created this Life Tributes page to make it easy to share your memories.

Send flowers to the Colestock family.