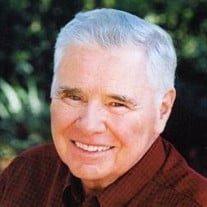 Thomas Patrick Sexton Born: Feb. 8, 1926, West Orange, N.J. Died: Sept. 18, 2018, Lemoyne, Pa. Thomas Patrick Sexton, of Lemoyne, 92, died peacefully at home on 9-18-18. Born in West Orange, NJ, on 2-8-26, he was son of the late Thomas C. Sexton and Margaret (Drew) Sexton, and brother of the late John Sexton and Dorothy (Sexton) Force. He is survived by his beloved wife, Anne L. (McCormick) Sexton, children Sharon Sexton (Tom Ferrick), of Philadelphia, and Thomas Patrick Sexton III (Barbara Weiss Sexton), of Camp Hill, and four grandchildren, Thomas and Cormac Ferrick, and Jacqueline and Connor Sexton. He earned a BS, Seton Hall University, where he was valedictorian of the Class of ’51; MA, Mexico City College; PhD Universidad de Madrid. He was a professor of Spanish at Kutztown University and before that taught in Orange County, Calif. In retirement, he acted in regional theater and TV commercials. In June 1943, at age 17, he left for training with the Navy Seabees. On D-Day, June 6, 1944, he landed on Omaha Beach, France (Easy Red Sector) with the 111th Seabee Battalion. After Normandy, he served on Guam. He was honorably discharged two years later, after recuperating stateside from tuberculosis contracted in Guam. A Mass of Christian Burial will be held on Thursday, September 20th 2018 at 11:00 AM at Saint Thereas's Catholic Church, New Cumberland. Burial will be at Indiantown Gap National Cemetery with Full Military Honors on Friday, September 21, 2018 at 10:00 AM. In lieu of flowers, gifts to the Seton Hall Fund are welcome. The Musselman Funeral Home and Cremation Services Is Honored To Serve The Sexton Family.

The family of Thomas P. Sexton created this Life Tributes page to make it easy to share your memories.

Send flowers to the Sexton family.