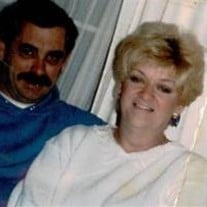 Vickie A. (Hostetler) Martson, age 65, of Camp Hill, passed away peacefully, February 9, 2017 at her home, surrounded by her loving family, after a courageous battle with cancer. She was a loving wife, mother, grandmother (Meme), and sister. Born in Lemoyne, September 16, 1951, she was the youngest daughter of the late Fred E. and Mary E. (Barlup) Hostetler. Vickie was preceded in death by her son, Matthew Levan. Vickie was a graduate of Cedar Cliff High School, a homemaker and was of the Methodist faith. Vickie loved her family and her kitties (Rocky being her favorite) and her granddog, Mason. She also enjoyed watching old television shows and football. She was an avid Steelers fan, and now has the best seat in the house. Vicki is survived by her husband, David of 27 years, sister; Sandy Updegraff of New Cumberland, brother; Wayne Hostetler of Lemoyne, children; Hollie Martson of Rossville, Jason Martson of Highspire, and Mike Levan, of North Carolina, three step children; Chris Martson of Ohio, Jeff Martson of Carlisle and Lisa Martson of Dillsburg, and several grandchildren. A memorial service will be held to honor Vickie’s life at Grace United Methodist Church, 313 Herman Avenue, Lemoyne, PA on Thursday, February 16, 2017 at 3:30 PM with Rev. John Shellenberger officiating. Inurnment will be private and at the convenience of the family. The family will receive friends in the church parlor from 2:30 PM until the service time. In lieu of flowers, the family requests donations in Vickie’s memory be sent to either the American Cancer Society, Route 422 and Sipe Avenue, Hershey, PA 17033 or to the Humane Society of Harrisburg, 7790 Grayson Road, Harrisburg, PA 17111. Musselman Funeral Home Is Honored To Serve The Martson Family.

Vickie A. (Hostetler) Martson, age 65, of Camp Hill, passed away peacefully, February 9, 2017 at her home, surrounded by her loving family, after a courageous battle with cancer. She was a loving wife, mother, grandmother (Meme), and sister. Born... View Obituary & Service Information

The family of Vickie (Hostetler) Martson created this Life Tributes page to make it easy to share your memories.

Send flowers to the Martson family.