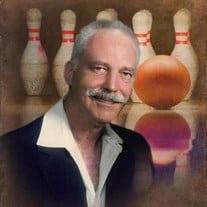 William “Bill” S. McCormick, 91, of Wormleysburg, PA passed peacefully on April 29, 2020 at home. Bill was born on April 7, 1929 to the late Walter F. McCormick and Cynthia Boyer in Wormleysburg, PA. After graduating high school, Bill joined the U.S. Navy and was in combat in the Pacific Ocean Theater during the occupation of Japan. After serving his country, Bill started a family but experienced tragedy shortly after. Bill lost his son shortly after he was born and then his first wife in an automobile accident shortly after his son’s birth. Despite this, Bill managed pull himself up by his bootstraps, continued raising his kids, proceeded with his 20-year career as a correctional officer with SCIC, and lived a fulfilling life in which he always remained in the present. Bill is survived by his loving devoted wife Lynn A. McCormick, to whom he has been married for 36 incredible years, his daughters Kelly Ann Sloan and Kathleen Lyskava, three stepchildren, his sister Barbara Fisher, nine grandchildren, and three greatgrandchildren. Bill will be most remembered for never letting grass grow beneath his feet. He belonged to VFW Post 7451, The American Legion Post 109, The New Cumberland Senior Center, and Der Harrisburg Maennerchor. He also actively bowled, toting three perfect games. Along with bowling, Bill also enjoyed playing darts, pool, cards, and the occasional game of golf, but what he enjoyed most was singing. He had his own Barbershop quartet, loved karaoke, and appeared in a couple of plays for HCT. To say he had a competitive spirit doesn’t do Bill justice, he was always up to the challenge. If Bill wasn’t competing, he could be found with his wife or walking his dogs Molly and McGee. A private service will be held at the family’s convenience to celebrate Bill’s life. In lieu of flowers, the family asks donations be made to the Alzheimer’s Foundation of America at 322 Eighth Avenue, 16th Floor, New York, NY 10001 or online at https://alzfdn.org/. The Musselman Funeral Home is Honored to Serve The McCormick Family. 324 Hummel Avenue, Lemoyne, PA 17043.

The family of William "Bill" S. McCormick created this Life Tributes page to make it easy to share your memories.

Send flowers to the McCormick family.