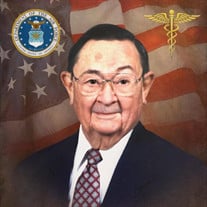 William J. Boyd, MD, 90, of Mechanicsburg, PA, went to be with the Lord on March 26, 2020, a beloved father and surrounded by family. He was born on June 4, 1929 in Lebanon, PA, to Norman and Hilda Boyd. He is preceded in death by his parents and cherished wife of 56 years, Jeanne Z. Boyd. William is survived by his brother, Robert H. (Dorothy) Boyd, his brother-in-law, Ralph B. Zeiders, his daughters Patricia (John) Blauch, Kathleen Kroh, Suzanne (Steven) Lynch, his grandchildren Lindsay Boyd (fiancé Billy Deily), Sean (Destiny) Boyd, his great-grandson James William Boyd, and numerous nieces, nephews, and friends. William was a member of Good Shepherd Catholic Church, Camp Hill. He enjoyed grilling all year round, his sailboat in Pakasu, golfing, traveling, dancing with Jeannie, annual family trips to Wildwood, NJ, and spending time with his family. He graduated from Lebanon Valley College in 1951 with a Bachelor of Science in Chemistry. He then went on to gradutate from Hahnemann Medical College, Philadelphia, and completed his medical residency at Harrisburg Hospital. Following his marriage to Jeanne, he served in the Air Force as a captain from 1956 – 1958. William was a partner in the medical practice of Grandon and Boyd, selflessly serving the Harrisburg area as a doctor of internal medicine, retiring in 1995. William was affiliated with Holy Spirit Hospital and Harrisburg Hospital. During his career, he was loved and respected by his patients, their families, and the medical professionals with whom he worked. Dr. Boyd was instrumental in introducing CPR to physicians in the Harrisburg area, working closely with the American Heart Association. As a resident, he was a member of the first group to learn this new method of saving lives at the Mt. Sinai Hospital, New York City. At that time, CPR was referred to as closed chest cardiac resuscitation. Dr. Boyd educated local physicians in the first use of peritoneal dialysis. During his career, Dr. Boyd served as president of the medical staff at the Rehab Hospital, Mechanicsburg, president of the Central PA Academy of Medicine, president of the Dauphin County Medical Association, and president of the PA Medical Association. He was awarded for 50 years of service by the PA Medical Association. Due to the current pandemic, his funeral and burial will be private. A Celebration of Life will be held at Good Shepherd Church at a later date. In lieu of flowers, memorial donations may be made to the American Heart Association or the Juvenile Diabetes Research Foundation (JDRF). The Musselman Funeral Home is Honored to Serve The Boyd Family. 324 Hummel Ave, Lemoyne, PA, 17043. MUSSELMAN

William J. Boyd, MD, 90, of Mechanicsburg, PA, went to be with the Lord on March 26, 2020, a beloved father and surrounded by family. He was born on June 4, 1929 in Lebanon, PA, to Norman and Hilda Boyd. He is preceded in death by his parents... View Obituary & Service Information

The family of Dr. William J. Boyd created this Life Tributes page to make it easy to share your memories.

Send flowers to the Boyd family.