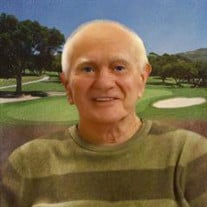 William (Bill) H. Mitchell, 82, of Harrisburg, passed away peacefully surrounded by his loving family, Saturday, October 29, 2016 at Country Meadows Nursing Home, Lancaster. A son of the late Kathryn (Barto) and Phillip Mitchell, he was born in Emigh Run, PA on January 1, 1934. He graduated from Clymer High School, and later received an Associates Degree from Penn State. He was a US Army Veteran and had retired from PPL after 36 years of service. He was an avid golfer, and was a devoted caretaker to many. His greatest joy in life was spending time with his beloved grandchildren. In addition to his parents, he is preceded in death by his wife, Bonita J. (Aughenbaugh). He is survived by his son, Andrew P. Mitchell (Diana Pritchard), a daughter, Andrea L. (Perry) Merlo, and 4 grandchildren, Hayley and Ethan Mitchell, and Serena and Christopher Merlo. A viewing will be held from 2:00 to 4:00 PM on Friday, November 4, 2016 at Musselman Funeral Home, Lemoyne with funeral services beginning at 4:00 PM. Burial will be at the convenience of the family. In lieu of flowers, contributions can be made to Grane Hospice, 4 Lemoyne Drive, Lemoyne, PA 17043. Musselman Funeral Home Is Honored To Serve The Mitchell Family.

The family of William H. Mitchell created this Life Tributes page to make it easy to share your memories.

Send flowers to the Mitchell family.