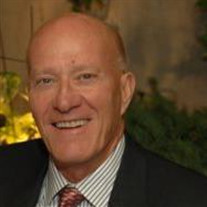 William Charles O’Brien, recently of Mechanicsburg, PA and Beach Haven, NJ, passed away March 11, 2017, at his home and with family. Bill, also known as OBie to his oldest buddies and two granddaughters, was born in Harrisburg to Patrick and Violet (Weakland) O’Brien and became a proud member of the West Shore High School Class of 1959. School is where his lifelong traits as an accomplished athlete and trustworthy friend began to flourish. Bill served in the Navy as an electronics technician which helped launch his career in telecommunications. In 1962, after a whirlwind courtship, Bill married Donna Heckert, whom he said was ‘the best thing that ever happened to him.’ After starting a family in Pennsylvania, they moved to Maryland. Bill owned two companies, OBITEL in Washington, D.C., and later, Capitol Area Telephone, Inc., to serve the greater Harrisburg region. He spent many tireless years building successful businesses and raising two daughters, Kelly and Katie, with beloved wife, Donna. Beach trips to Hatteras and Long Beach Island as well as backyard pool parties were his favorite respites. Watching the Redskins [win] or grooming his tidy landscape atop his John Deere were constant pleasures for years. After retiring in 2009, Bill and Donna enjoyed extensive travel in North America and Europe. Bill was a true example of a self-made man. He was happiest spending time with and fiercely loyal to family and close friends. His loved ones concur that it’s no exaggeration to say he was humble, selfless, quietly generous, meticulous, unstinting, and strong. He loved ‘skies of blue and trees of green.’ Bill is survived by his wife of 56 years, Donna (Heckert) O’Brien; daughter Kelly O’Brien and her husband, Ian Lowe (Stanton Prior, England); daughter Katie O’Brien Engen, her husband, Eric Engen, and granddaughters Katelyn Engen and Brennah Engen (Kensington, MD); and his brother, Kenneth O’Brien (Pittsburgh, PA). A Catholic funeral mass will be held 11 a.m. Thursday, March 16 at St. Elizabeth Ann Seton Church (310 Hertzler Rd., Mechanicsburg) with a ceremony at Rolling Green Cemetery (1811 Carlisle Rd.) immediately following. There will be no viewing. The family wishes to thank Homeland Hospice and many professional medical professionals and compassionate caregivers. In lieu of flowers, donations in Bill’s honor can be made to The Skyler James Wenger Scholarship (http://bit.ly/BillOBrienHonor). Musselman Funeral Home Is Honored To Serve The O’Brien Family.

William Charles O&#8217;Brien, recently of Mechanicsburg, PA and Beach Haven, NJ, passed away March 11, 2017, at his home and with family. Bill, also known as OBie to his oldest buddies and two granddaughters, was born in Harrisburg to Patrick... View Obituary & Service Information

The family of William Charles O'Brien created this Life Tributes page to make it easy to share your memories.

Send flowers to the O'Brien family.