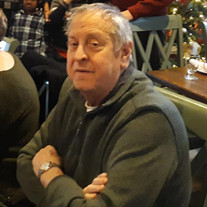 William McCready Parker III, 78, of Mechanicsburg, Pennsylvania passed peacefully April 14, 2020 at UPMC Pinnacle Harrisburg Hospital. He was born on December 2, 1941 to William McCready Parker Jr. and Betty (Rynd) Parker in Oil City, Pennsylvania. William proudly served in the United States Army Reserve. William continued to live in Oil City for many years, becoming recognized as a citizen of the year along with his wife Kathleen. Together they are known for starting the annual Oil Heritage Week, now known as Oil Heritage Day. William also purchased Printz’s Clothing Stores in Oil City and continued to pursue success. Politics were important to William, he frequently helped work the polls during elections. He also belonged to the Second Presbyterian Church, Oil City. After years of entrepreneurship, William moved to the Harrisburg area with Kathleen and his daughter, Anne. William remained active after retirement, joining the local Lion’s Club. He loved life, his family, and the Pittsburgh Steelers. William is preceded in death by his loving wife Kathleen C. Parker, with whom he spent 42 years of marriage with. He is survived by his daughter Anne C. Parker, sister Elizabeth (Parker) Quigley, husband Keith Quigley, a feline grandson Bogart, nephews Bruce Quigley, Ben Quigley, and Bill Quigley, numerous great-grand nephews and cousins, and one great niece. A funeral service for William McCready Parker III who passed away on April 14, 2020 has been scheduled for 11 am, Wednesday, July 29, 2020 at the Morrison Funeral Home, in Oil City, PA. Friends and family will be received at the funeral home from 10 to 11 am, immediately prior to the service, and again at the Peddlers and Paddlers Inn, 1322 Elk St, Franklin following the service. The time for the gathering will be announced at the funeral. In lieu of flowers, memorial contributions can be made to the American Heart Association, American Diabetes Association, or Christian Companion Senior Care. The Musselman Funeral Home is Honored to Serve The Parker Family. 324 Hummel Avenue, Lemoyne, PA 17043.

The family of William M. Parker III created this Life Tributes page to make it easy to share your memories.

Send flowers to the Parker family.