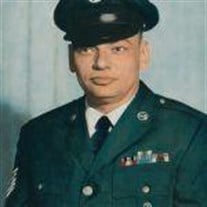 Willis Wayne Campbell August 23, 1936 - November 13, 2019 Retired Master Sargent Willis Wayne Campbell, age 83, died Wednesday November 13th at Remarkable Health Care of natural causes. Willis Wayne Campbell was born at home in Doylesburg, Pennsylvania. He was the eldest child of Wendell and Emma Campbell’s four children. Wendell and Emma had three daughters, Kay, Sandra Lee (1950), and Glenda (1953). Willis and his sisters grew up in Spring Run, Pennsylvania. He graduated High School and in 1955 joined the Air Force. After completing basic training and special weapons training, he was transferred to Carswell Air Force Base in Fort Worth Texas where he met Dueana Atreal Campbell, daughter of Jewell and Jess Shelton. Willis and Atreal married on June 14, 1958. His service included time in England on a joint operation with the Royal Air Force, working on Thor missiles. After his England mission, he was transferred to Little Rock, Arkansas where he worked on the introduction of the newly developed Titan II missiles as a team chief and earned his Master Missileman Badge. In 1963, Willis and his wife became parents of their only son, Ian Dwayne Campbell. Willis’s next assignment was in Greece for one year. Upon returning from Greece he served two years at McConnell Air Force Base again working on Titan Missiles where he achieved rank of Master Sargent and earned his Oak Leaf Cluster. After his Wichita, Kansas assignment, he served one year in Korea at Kunsan Air Force Base. Upon returning, he was assigned to Malmstrom Air Force Base in Great Falls, Montana where he worked on Minuteman Missiles. Willis received his third Air Force Commendation medal with two Oak Leaf Cluster prior to retirement. He retired from the Air Force after 20 year of service as a Master Sargent on July 1, 1975. After retiring from the Air Force he worked for Tandy Corporation as a machinist for 21 years where he retired. Mr. Campbell is survived by his son Ian Dwayne Campbell and two sisters, Kay Parson and Glenda Starliper. He also left behind two granddaughters, Victoria Ashley Campbell and Jennifer Nicole Campbell.

The family of Willis W. Campbell created this Life Tributes page to make it easy to share your memories.

Send flowers to the Campbell family.